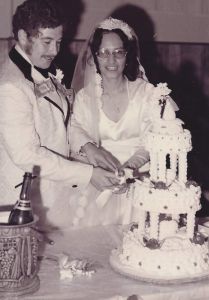 Red Doc Farm, the Dr. Roland and Elia Sanchez and family adventure, began in the 1960s. A young Roland Sanchez, while back in high school, walked through the stalls of the New Mexico State Fair and saw beautiful Santa Gertrudis cattle from the historic Forked Lighting Ranch from Pecos, New Mexico. He dreamed to one day bring these beautiful animals to his life somehow, although then, was not quite sure how and to what extent this dream would unfold.

Roland attended New Mexico State University and graduated as a civil engineer where he built on his logic and reasoning. Eventually, Roland changed career paths from engineering to pursue a career in medicine, never leaving behind his engineering mind. Roland met his wife Elia, a local, hard working farm girl and the two were soon married. They then moved to Fort Worth, Texas where Roland would walk the bowels of the hospital during his residency at Tarrant County Hospital. One night on call, Roland picked up a Santa Gertrudis breed magazine and rekindled his interest for Santa Gertrudis cattle. 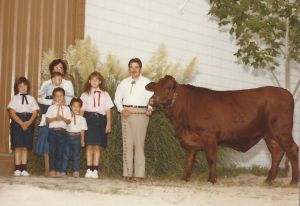 Soon thereafter, the couple bought their first Santa Gertrudis, a bull named Mr. Peanut from De Leon, Texas. Early on, the Sanchez family tried different breeds, however none would match the hardiness and need for low input like the Santa Gertrudis. By 1979, they decided to expand into the registered seed stock operation and bought their first registered cattle from Ken Meeks at San Jon, New Mexico and quickly thereafter bought a small herd from Olivarez Ranches in South Texas. Roland and Elia steadily built up their herd and also began to build a base of bull buyers. As the herd grew so did their family; first Jessica, Alicia, Adolfo, Roland II “Scooter”, Florian and later Emilio. In 1988, the Sanchez children became deeper involved in the operation by participating with Santa Gertrudis show heifers. They started as most junior projects however; they continued the breeding program. 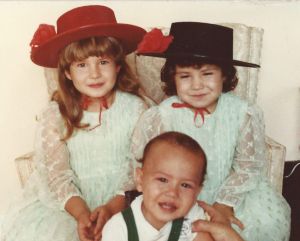 As the children got older and the herd continued to grow, Red Doc Farm began to break into the bull business. During the Rocky Mountain Santa Gertrudis Sale at the National Western Livestock show, Roland briefly stepped away to the restroom and upon his return and to his surprise Elia had bought a trailer load of bulls. Fortunately, a winter storm had prevented many buyers from making the sale and the stout Gert bulls in the sale came back to Red Doc Farm for a bargain. As those bulls were sold it was discovered there was a demand for quality bulls in volume. The Sanchez family, now quite well known as Red Doc Farm, decided to morph into a larger seed stock operation. By the late 1980s, Red Doc Farm was the benefactors of several dispersal sales including the Forked Lighting Ranch that Dr. Roland had once admired as a young man. A major breakthrough for RDF came about with a young bull named Cherokee General from Sedalia, Colorado. It was Cherokee General who made Red Doc standout competitively in the bull business against other breeds. 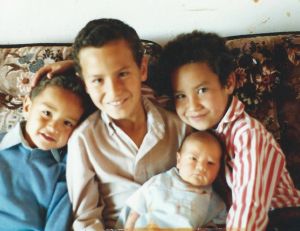 Up until that point, the herd had consisted mainly of Texas maternal, horned based genetics. With the addition of the Cherokee Ranch polled, easy fleshing, and early maturing genetics crossed with their founding Texas herd traits, made tremendous performance cattle. Cherokee General soon became the senior herd sire at Red Doc Farm as his calves won gain test after gain test amongst all breeds. This bull was desired by serious cattlemen both locally and foreign, with much semen marketed to Mexico and in Latin America. King Ranch selected this sire out of two in the nation for his high-accuracy in performance traits to introduce into their herd. Cherokee General continues to leave his impression on the Red Doc herd, as the program continues to use his genetics to influence their heifer AI program. A mount of Cherokee General, the trait leader, now resides at Red Doc headquarters; reminding Red Doc Farm continuously of their roots, great obstacles overcome, and their direction in the cattle business. 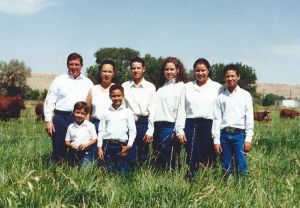 In 2002 Red Doc Farm was fortunate to meet Mr. John Josserand, owner of AZTX feeders in Hereford, Texas. Red Doc was seeking a partner in the cattle business to provide markets for their Santa Gertrudis steers. Thanks to John Josserand, Tito Morales and Wade Lewis Red Doc started a steer buyback program with their customers and a retained ownership program with AZTX feeders. During their participation the first year, The Sanchez Family found out how profitable their Red Doc sired steers could be as they made record profits and had a feed conversion ratio of 5.5lbs of feed to 1 pound of gain.

Since its immersion in the mainstream cattle industry in 2002, Red Doc Farm has continued to enhance their program with steer feed-out data, carcass collection and aggressive bull development. 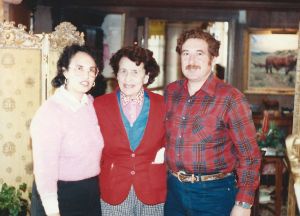 Red Doc Farm continued to evolve as a commercially oriented seed stock operation. Red Doc Farm credits their bull buyers for their input on developing a well-balanced beef animal. The use of ultrasound data and carcass data as a selection tool in our Santa Gertrudis cattle has led to exceptional cattle that will grade 80%+ choice on their cull cattle and still survive in the high desert and other rough climates. Red Doc continues to incorporate modern tools for selecting high performing low input cattle for their bull buyer. The breeding program is one that developed a product for the serious cattle producer seeking hardiness, heat tolerance, and heterosis and carcass quality.

Based on the incredible growth and strength of their herd the Sanchez family decided to strike while the iron was hot and began their first annual Red Hot Bull Sale in 2004, held every second weekend in April. This allowed an annual setting to provide their high demand bulls for every cattleman. 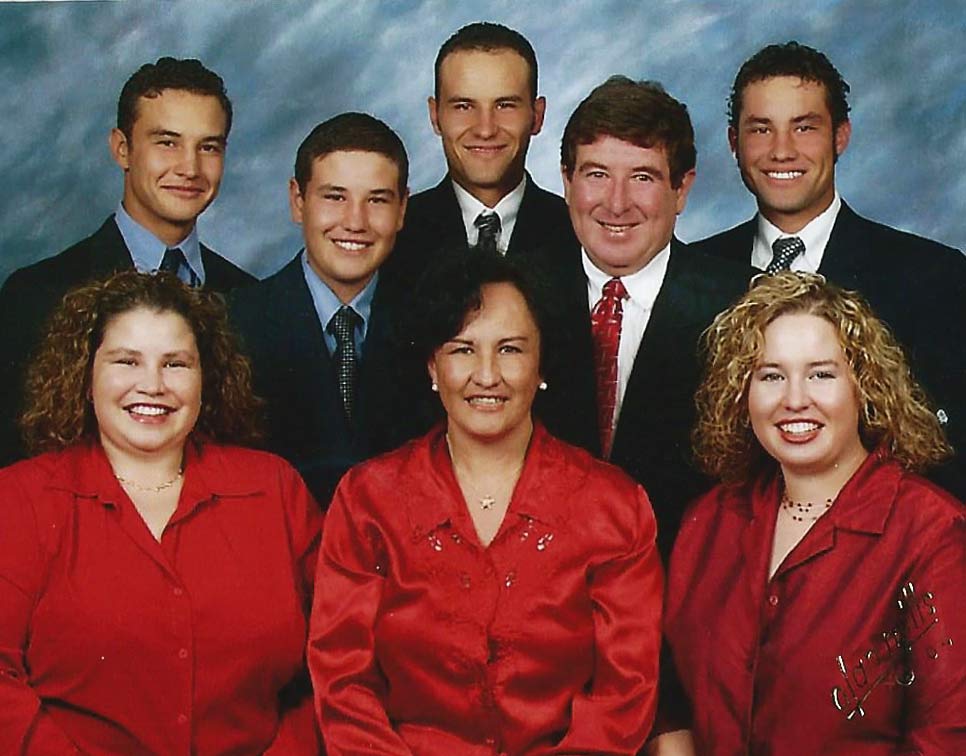 The magnificent breed of cattle that once caught the eye of a young man many years ago has now become a huge part of Dr. Roland, Elia and family’s lives. Many of their wildest dreams have come true and many of them associated with agriculture and the Santa Gertrudis breed. Dr. Roland, Elia and the rest of Sanchez family have found their niche within the cattle business that has allowed Red Doc Farm to function as a well-oiled machine. Red Doc continues to focus on the fundamentals of hard work and respect that built the business. The farm and all arms of the business continue to grow and develop with the ever changing markets.

Thank you to our 2021 Red Hot Sponsors! We have searched high and low for excellent products and services and this group of sponsors does an exceptional job. Not only do they offer excellent products and services but their customer service is unrivaled. If you'd like a contact for one or all, please let us know. Some will be at the sale to tell you more about what they have to offer you, your herd and your operation. Stop by and say hello! 🔥 ... See MoreSee Less

The countdown is on! Less than 2 weeks until the Red Hot Bull Sale. We are eager to help you if you have questions about bulls, accommodations or anything in between! Let us know how we can help. 🔥🔥🔥🔥🔥🔥🔥🔥 ... See MoreSee Less